Chief Justice appointment is best left to the next president, said Akbayan Party-List. 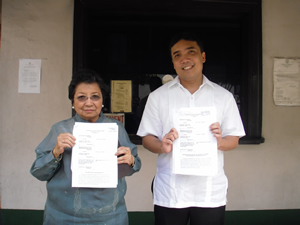 Akbayan Party-list called upon the Supreme Court to block petitions to allow Gloria Macapagal Arroyo to prematurely appointment the successor to Chief Justice Reynato Puno by filing an opposition to the pending petitions.

“To approve such petitions will be an affront to our constitution,” Akbayan Party-List Chair Emeritus Etta Rosales reminded the Supreme Court on Thursday.

According to Rosales, there is sufficient time to fill in the vacancy that CJ Puno will leave upon his retirement on May 17.

“A new president will be sworn in on June 30, 44 days after Chief Justice Puno retires. The next president will have a month and a half to make this appointment. This is well within the 90-day interim period that the constitution provides for the appointment of a new Chief Justice,” Rosales explained. “The administration’s fear that the position will be left vacant beyond the constitutionally prescribed period is unfounded.”

The Constitution says that a vacancy in the Supreme Court must be filled within 90 days. Counting from May 17, the position must be filled by August 15, 2010. The new president, who will be sworn in on June 30, will have more than ample time to meet that deadline.

“The unconstitutionality of Mrs. Arroyo’s midnight appointment of Chief Justice is one of the very few instances when the spirit of the law may be deduced clearly and without debate,” said Atty. Ibarra Gutierrez, III, director of the Institute for Human Rights of the UP College of Law.

Gutierrez pointed out that Article VII, Section 15 of the constitution maintains an absolute bar against making appointments “two months immediately before the next presidential elections up to the end of [the outgoing President’s] term.”

According to the law, the only exception is for executive positions where continued vacancies ‘will prejudice public service or endanger public safety.’

“There are 14 justices that are fully capable to adjudicate pressing election concerns, if that is their problem. By law, the duties of a Chief Justice may also be devolved to an Associate Chief Justice should the Chief Justice be unable to perform his duties,” Gutierrez continued. “It is ridiculous how pro-Gloria lawyers are twisting legal facts to accommodate the whims of an administration that is desperate to preserve its hold on power.”

Gutierrez assessed that the nation will find itself confronting a constitutional crisis should Mrs. Arroyo appoint her midnight chief justice.

“If Mrs. Arroyo succeeds in appointing her chief justice of choice, the highest arbiter of the law, who can we rely on to adjudicate such blatant violation of the constitution with clear, unquestionable impartiality?” Gutierrez pointed out. “We need to preserve the integrity of the judiciary. If the Supreme Court were beholden to GMA, there would be very limited legal remedies left for the Filipino people to defend themselves from Mrs. Arroyo’s abuses.”

Meanwhile Rosales, who was a three-term congress representative for Akbayan, also pondered the motivations behind a clearly unconstitutional move.

According to Rosales, Mrs. Arroyo is “clearly beefing up her defense against the imminent threat of prosecution” upon the expiration of her term as president.

“Mrs. Arroyo knows that the next administration will see to it that she is held accountable for her abuse of authority during her 9-and-a-half-year rule,” Rosales said. “Without the privilege of immunity from prosecution and incarceration that comes with the presidency, appointment of a chief justice beholden to her would be her only insurance against this very imminent threat.”

Rosales also added that the designs of the incumbent president go beyond mere political survival, her relentless lust for power being an open secret.

“She’s got her eyes on the Speakership of the House of Representatives,” Rosales said. “She’s populating the list of candidates for Lower House seats with her closest family members and allies. It’s as if she’s turning congress into a private army that’s ready to pounce at the next opportunity to usurp control over the leadership of the nation, and a friendly Chief Justice is necessary to put the legal rubber stamp of approval on all her suspected schemes.”

“The Supreme Court is the people’s last line of defense in this matter. It should deny Mrs. Arroyo the opportunity to perpetuate herself in power,” Rosales concluded. “It must declare Mrs. Arroyo’s appointment of a midnight chief justice illegal.”