In keeping with our academic nature, Pulse Asia disseminates to the public some findings from its April 2010 Pre-Election national survey.

The survey fieldwork was conducted from April 23 to 25, 2010 using face-to-face interviews. Key developments in April 2010 include the following:

For the electoral preference module, Pulse Asia made use of a sample ballot, measuring 8.5” x 26”, that is a facsimile of the COMELEC official ballot. Respondents were asked to indicate their preference on the ballot based on the instructions written therein.

Based on a multistage probability sample of 1,800 registered voters 18 years old and above, Pulse Asia’s nationwide survey has a +/- 2% error margin at the 95% confidence level. Subnational estimates for the geographic areas covered in the survey have the following error margins at 95% confidence level: +/- 7% for Metro Manila, +/-3% for the rest of Luzon and +/-5% for each of Visayas and Mindanao. Face-to-face field interviews for this project were conducted from April 23 to 25, 2010. (Those interested in further technical details concerning the surveys’ questionnaires and sampling design may request Pulse Asia in writing for fuller details, including copies of the pre-tested questions actually used.)

Pulse Asia’s pool of academic fellows takes full responsibility for the design and conduct of the survey, as well as for analyses it makes based on the survey data. In keeping with our academic nature, no religious, political, economic, or partisan group influenced any of these processes. Pulse Asia undertakes pre-election surveys on its own without any party singularly commissioning the research effort.

Senators Ramon B. Revilla, Jr. and Jinggoy E. Estrada maintain their lead in the senatorial race; only 37% of Filipino registered voters have a complete senatorial line-up for the May 2010 elections.

Of the 61 individuals running for senator, 18 have a statistical chance of winning if the May 2010 elections were held during the survey period. Five of the probable winners are from the Liberal Party (LP), three from either the Nacionalista Party (NP) or the Pwersa ng Masang Pilipino (PMP), and two are with the Lakas-Kampi Christian Muslim Democrats (CMD). Four political parties have one probable winner each – Kilusang Bagong Lipunan (KBL), Nationalist People’s Coalition (NPC), Partido Demokratiko Pilipino-Lakas ng Bayan (PDP-Laban), and People’s Reform Party (PRP) – while one probable winner is running as an independent candidate. (See Tables 1a and 1b — Senatorial Preferences) 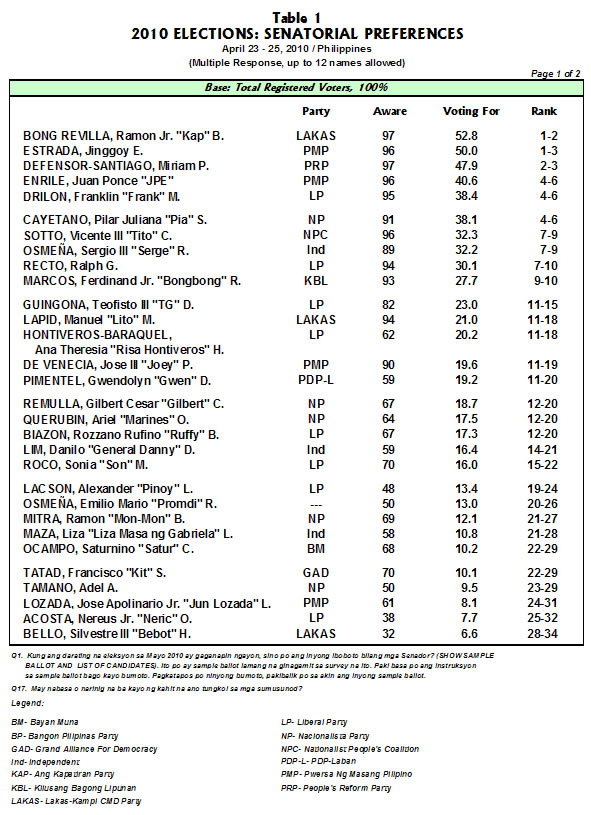