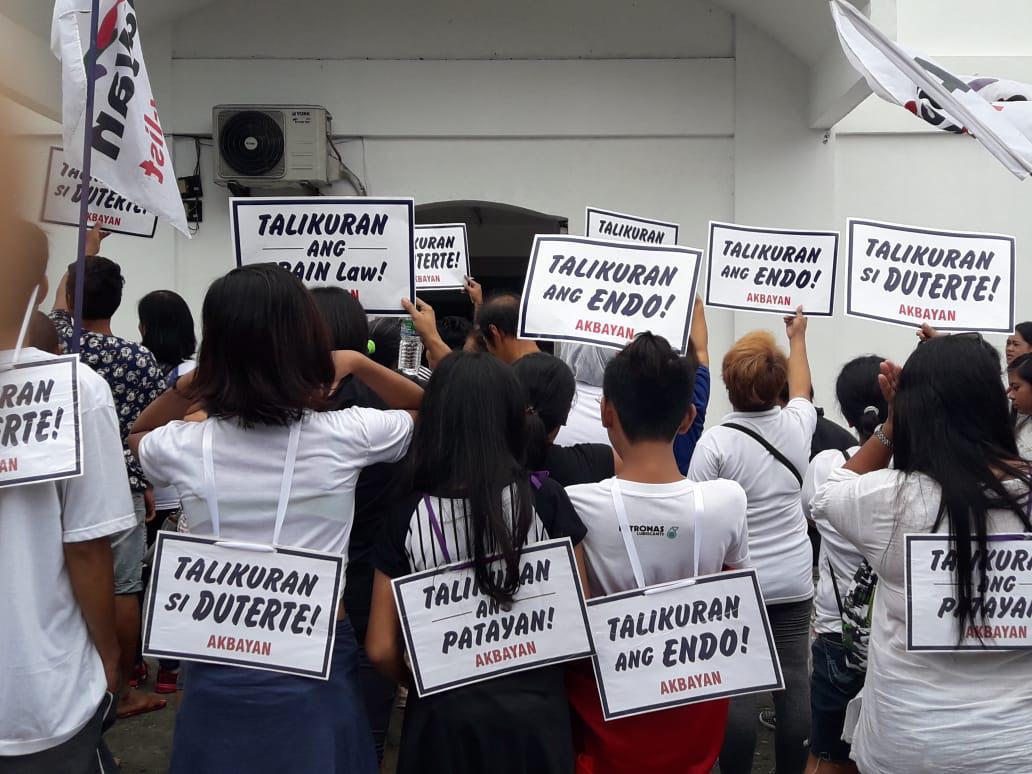 As President Rodrigo Duterte dangles his new constitution before his allies in Congress in exchange for possible extending their term for three more years, Akbayan warned the Filipino people about the serious and irreversible damage his regime will cause future generations if his dictatorial and bloodthirsty schemes remain unchallenged.

"After two years in power, the Duterte administration has exhibited ineptitude, indecency, and impunity as its trademarks. Duterte himself is the main generator of crises on multiple fronts,” Akbayan spokesperson Gio Tingson said.

“The Filipino people will witness this yet again, as he delivers his third State of the Nation Address," Gio Tingson added.

Akbayan cites the unprecedented impunity and attacks on gender that comprise the human rights crisis; the surrender of Philippine sovereignty in light of China’s territorial incursions and expansion that show a foreign policy crisis; and the high inflation, peso devaluation, and persistence of ENDO that signify an economic crisis—all happening under the nose of President Duterte.

"By now, it must be clear: Duterte is leading the Philippines from one crisis to another," Tingson stressed.

The party also slammed the “gall” of the current administration that bats for a new constitution despite its failure to hold corrupt officials accountable.

“(P)olitical appointees who have been caught red handed dipping their hands in the public coffers have yet to be put behind bars as Duterte basks in the stench of his corrupt cabal of loyalists, who gets appointed, fired, and reappointed like garbage in a recycling bin,” Tingson further said.

Akbayan, in its position paper, maintained that cha-cha will only create more problems than solutions as it “will only incur immense expenditures for taxpayers to shoulder, widen the gap between rich and poor regions, tighten the warlords' and dynasts' grip in politics, and worse, allow himself to run for office anew.”

As such, Akbayan called for the “strongest opposition to reject the Duterte regime’s policies.”

“We will mount an anti-incumbency campaign that will gear the Filipino people for the 2019 elections to counter Duterte’s bid for absolute control,” Tingson said.

“Discernment is needed as the time for the prolonged honeymoon is over and we must not allow our children to continue to grow under a culture of fear, violence, and impunity, only to make them face the dire social, political, and economic consequences of Duterte’s regime,” Tingson said.

The party also vowed to push for “a new economy” that will address the ills under the TRAIN Law, provide sufficient and regular jobs for Filipinos, and continue social welfare programs for the poorest of the poor such as the 4Ps.

“A redistributive economy is one that Akbayan will pursue, not to simply produce wealth for wealth sake, but to ensure that no Filipino will get left behind,” Gio Tingson said.

“Never again commit the mistakes of our past. It is time to fight for a new future. Armed with the people’s hope for a new future, Akbayan commits to relentlessly fight,” Tingson ended.