Akbayan expressed its sympathies to the families of the three Filipinos charged with drug  smuggling and executed by the Chinese government on Thursday morning. 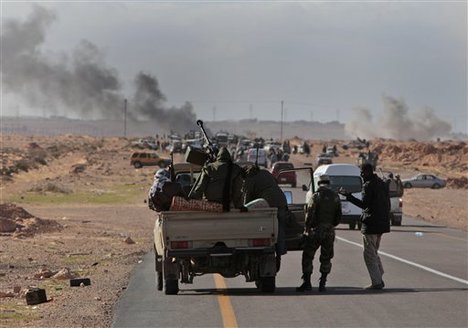 Akbayan supports the democratic opposition in Libya that seeks to end the 43-year-old dictatorship of Muammar Ghadafie.    It cannot, however, support the massive armed intervention launched by the United States, France, and Britain on Sunday, March 20.

A “No Fly Zone” to protect civilians is one thing.  An armed assault aimed at regime change is another thing altogether.  The latter  is the intent of the US-led intervention, which, although displaying the figleal of a United Nations Security Council resolution, goes far beyond the defensive aims of a no-fly zone to cross over into aggression against Libya.


Firing on ground troops and preemptively and indiscriminately destroying anti-aircraft installations will bring about precisely that loss of life that the intervention ostensibly seeks to prevent.  Civilians are being killed by the western assault when civilians were supposedly the people the action was supposed to protect.

The Arab Revolutions and the Democratic Imagination

The Arab democratic uprisings have brought a rush of nostalgia to many people who staged their own democratic revolutions years earlier.   As they watched events unfold in Cairo’s Tahrir Square on Al Jazeera and CNN, that  feeling of “all that is solid melting into thin air,” as Marx would have put it, returned to many of those who went to the barricades during  the original People Power Revolution in the Philippines in 1986. 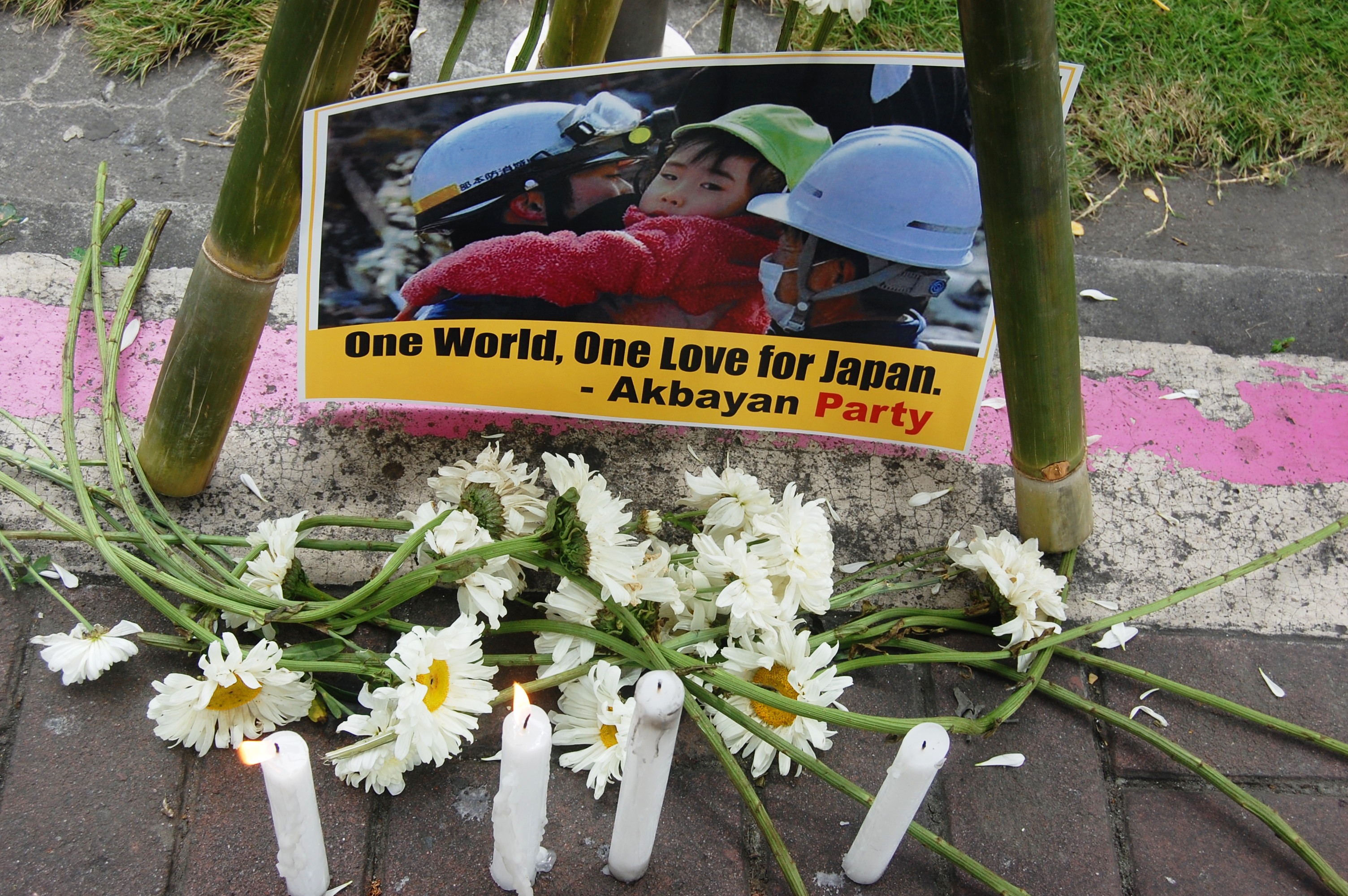 Akbayan Representative Walden Bello today led a “solidarity delegation” to the Japanese Embassy here in the Philippines to express the Filipino people’s deepest sympathies to the victims of the devastating earthquake and tsunami that hit their country.

The delegation also sought a dialogue with Embassy officials to get updates regarding the conditions of Filipinos in Japan.

In a statement, Bello said the Philippines joins the global community in expressing its utmost solidarity with the people of Japan.

“As a country and as a people, we offer our sincerest condolences to the people of Japan as they try to rise from this unparalleled disaster. Our thoughts and best wishes go with them,” Bello said.

Bello said Japan is a home to many Filipinos who are working to earn a living or have migrated to the country. He described it as a “second home” to a vast number of Filipinos.

“Home is where the heart is. As such, our compassion goes to Japan and its people,” Bello said. 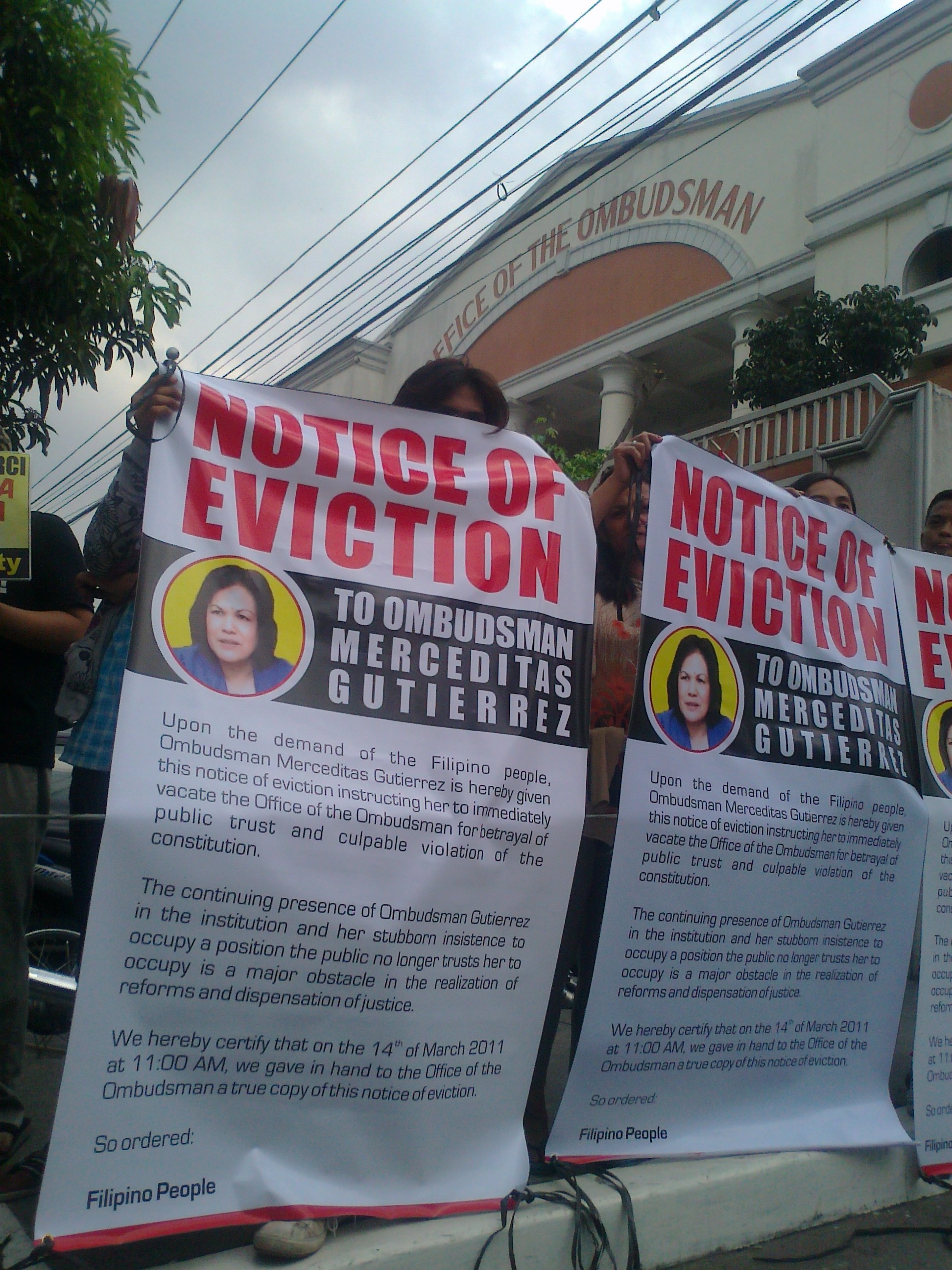 Akbayan Party served a notice of eviction to Ombudsman Merceditas Gutierrez on Monday demanding her to immediately vacate her post for betrayal of public trust and culpable violation of the constitution.

In a protest action held in front of the Office of the Ombudsman, the group brought outsized eviction notices, which they posted at the anti-graft office’s main gate to register the people’s lost of confidence to Gutierrez.  The group also warned of “wave after wave” of protest actions if Gutierrez insists on occupying the controversial public post.

“We are serving this notice of eviction to Gutierrez because she does not enjoy the public’s trust to continue staying as the country’s ombudsman,” said Akbayan Party spokesperson Risa Hontiveros. “Public trust is the basic ingredient in occupying any public office. With that element petered out, the position becomes ineffective in carrying out its tasks and functions.

Hontiveros said Gutierrez has no other recourse but to resign or be impeached.