Akbayan slams Bongbong's "unnecessary fiction", enjoins voters to shun him in May elections

Commencing Akbayan party-list's campaign against "undesirable candidates" in the May 2010 elections, the group staged a protest action in front of the national headquarters of Nacionalista Party senatorial candidate Ferdinand "Bongbong" Marcos Jr in Quezon City today asking voters to reject him in the coming polls.

EDSA I is remembered as one of the turning points in Philippine history—when we as a people overthrew the yoke of oppression and put to an end Marcos’ lupus-infested dictatorship.

"Blood is thicker than water." 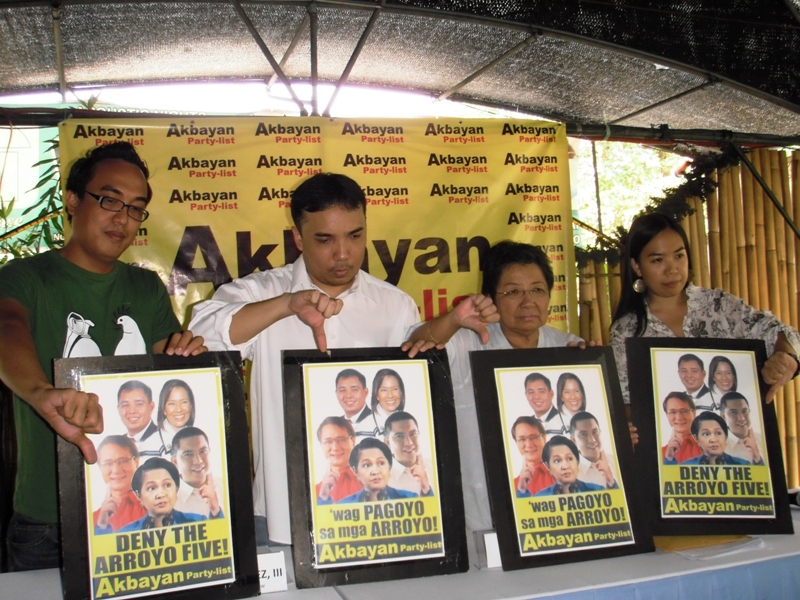 This is the statement issued today by Akbayan party-list during the launch of the "Deny the Five Campaign, a drive to stop five members of the Arroyo family including Mrs. Gloria Macapagal Arroyo from winning legislative seats in the May 2010 elections.

In a press conference in Quezon City, Akbayan said the campaign aims to repel Mrs. Arroyo and her family's intent of securing their interests in congress by populating the government body with clan members together with its cabal of trapo loyalists. The group said GMA plans to command an alternative power center from congress by exercising patronage and blood politics.

"The Arroyos' undertaking though legally permissible is appalling as it highlights the unappeasable hunger of the Arroyo family for political power while bringing to new heights the concept of political dynasties. With this latest caper, decency and propriety or whatever is left of it are completely petered out from our political process, leaving only raw and unadulterated impunity," Akbayan Chairperson Emeritus Loretta Ann Rosales said.

Rosales who is also a three-time former Akbayan part-list representative derided the Pampanga Representative's bid to become a party-list lawmaker.

"What marginalized group will Mikey end up representing? The party-list system intends to provide space for the representation of marginalized groups that would otherwise have no opportunity to win in traditional politics that dominates the district representation race. It is not a space for trapos, much less the first family, to use as an alternative route to Congress," Rosales said.

Rosales said the young Arroyo's entry in the party-list race is highly questionable. "This perpetuates the bastardization of the party-list system. The administration has already succeeded in claiming representation with Marilou Arroyo, now, an up and coming trapo like Mikey will break into the system with a party-list of his own choosing," Rosales asserted.

Rosales said many of the accredited party list organizations for the 2010 race are the same as those which their group challenged as administration-fielded bogus groups in the 2007 midterm elections.

In 2007, Akbayan launched the Bare the List campaign against accredited party-list groups suspected of being fronts of Malacanang. A still-operational campaign blog found at http://barethelist.wordpress.com/ was mounted in 2007 identifying the pseudo party-list groups. The list includes COMELEC accredited groups for the 2010 polls and controversial incumbent groups such as Bantay which is represented by the military general infamous for allegedly masterminding extrajudicial killings, respectively.

Meanwhile, University of the Philippines College of Law Professor Ibarra Gutierrez III said the legislative branch of the government is an attractive political fortress for the Arroyo family.

"Let us remember, many of Mrs. Arroyo's political debacles came from the legislature. Thus, one efficient way of hurdling all of these is by sacking Congress," Gutierrez said.

Gutierrez also said Mrs. Arroyo could make use the powers of the legislature to punish a new, yet unfriendly administration.

"Let us remember, congress has the exclusive authority to initiate an impeachment complaint against an incumbent President. It has relative control of the budget. It can also initiate congressional inquiries or even has the power to declare state of war or state of emergency. These things are enough to destabilize a new government," Gutierrez asserted.

For her part, Akbayan Vice President Marichris Cabreros said the Arroyo five's bid in the legislature is disheartening. She said this is especially true as the country is currently celebrating the 24th anniversary of the first people power uprising.

"After twenty four years, the very things we rebelled against are back in full force," Cabreros said.

Cabreros enjoined the Filipino youth to mount a "new Edsa", this time by exercising not only their right to suffrage but also to exercise their right to campaign against those that make a mockery of elections and the country's democratic processes.

"Almost a decade of Mrs. Arroyo's reign has left the youth a future with no promise. With her closest relatives in congress, running the country will seem like a tightly-knit family business. That is too much. This must stop," Cabreros said.

The group said the Deny the Five Campaign would use multiple arenas to campaign against the Arroyos. It includes voters' education, internet activism targeting social networking sites, a people-oriented shame campaign and a party-list watch out to expose bogus party-list groups.

The Arroyos are bastardizing the party-list system

The Arroyos are bastardizing the party-list system in order to keep themselves in power.

"This is not surprising at all," said Akbayan nominee Arlene “Kaka” Bag-ao regarding the admission of current Pampanga District 2 representative Mikey Arroyo that he is being asked to represent a party-list in the coming May elections.

“If the Arroyos, particularly GMA can tarnish the sanctity of the elections in what is now known as the Garci controversy, then it is not surprising that the Arroyos can do this as well,” noted Bag-ao.

Bag-ao explained that the entry of Mikey in the Lower House via a party-list nomination will mean another vote for GMA, who is gearing to gain the speakership of the house.

Critics to Comelec: Do you know where you’re going?

Does the Commission on Elections know where the May elections are heading?

Critics of the Comelec have warned that the automated polls—only less than three months away—could end up like a “train-wreck" because of numerous delays and setbacks in the poll body’s preparations.

Akbayan Rep. Walden Bello said time is running out for Comelec to make the voters trust the automated elections system.

“We honestly do not know where the Comelec is going to. Voter education is lagging. Fear of participating in the polls is widespread among those unfamiliar with the voting system and the Comelec is unable to assuage people’s fears," Bello told reporters at a press conference in Quezon City on Thursday.